We are a Portable Appliance Testing company based in Minster-on-Sea, Sheerness and currently serve Kent, and the rest of the UK. Our test engineers are qualified to the highest standards, hold City & Guilds 2377 qualification for in-service inspection and testing of electrical equipment and are covered by public liability insurance.

We currently use a modern calibrated Metrel portable appliance tester to test your equipment to the highest standards so you have peace of mind!

We conduct multiple tests making sure your appliances are safe to use, these include.

What is PAT Testing:

Portable Appliance Testing is where electrical appliances are routinely checked to see whether they are safe for continued use within the workplace.

PAT testing is vital to ensure the protection for your business and more importantly customers and employees.

Appliances covered is anything fitted with a BS1363 plug, including PCs, Kettles, Irons, Televisions, Toasters, Microwaves, Power Tools, Washing Machines, Vacuum Cleaners etc.... or anything that can be moved whilst connected to the electricity supply. 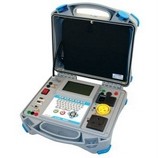 Other Electrician Companies In The ME12 Area